As mentioned previously, I’ve modified Noodlers Ahab and FPR Flex nibs with rotary tools to get some extra flex, or at least make it easier. While this is cheap and fun, the nibs aren’t as common as you might like if you want to do a lot of experiments.

However, I have a lot of Jinhao pens. These are very cheap, usually fairly good quality, and use fairly standard nib and feed sizes. The feeds used in the Jinhao X750 and 159, for example, are almost identical to those used in the nib units for Conklin pens. While their other pens use smaller nibs, some Jinhaos like the X750 and 159 use a reasonably standard-sized #6’ish nib.

Now, #6 isn’t really a standard size, per se. It usually denotes a nominally 6mm diameter radius, but the thickness of the material and the exact curvature can differ between manufacturers. A TWSBI Vac 700 nib will fit in a Jinhao 159 or a Noodlers Ahab (loosely), while an Ahab nib can be jammed into a TWSBI Vac 700 if you want to risk it.

The overall material of the Ahab nib seems to be thicker than the TWSBI nib – about 0.1mm thicker. However, at the thinnest part of the tines, the Ahab nib is almost half as thick as the TWSBI, one of the causes of the difference in flexibility between the semi-flex Ahab and the rigid TWSBI.

Jinhao nibs are pretty rigid. They’re relatively thin at the root of the nib – about 0.15mm – thickening to about 0.3mm at the breather hole and almost 0.5mm at the thickest part of the tines. While some might deride Jinhao products as “crap” or even “counterfeit” (a very unfair and arguably racist bias, in my opinion) Jinhao nibs really aren’t very bad at all. Their quality control isn’t perfect, but I really think it’s on a par with other brands in the sub-£100 market. And I’ve seen a lot worse from other brands in pen costing ten times as much.

As far as flex modding’s concerned, unlike Noodlers Ahab and FPR nibs, the Jinhao slit is fairly short, so the approach used by those two semi-flex nibs won’t work. Saying that, there are perfectly good flex nibs with short slits.

One advanced technique used by expert nibmeisters is to thin the material on the underside of the nib, making it more flexible. As an advanced technique, I assume this is only really done on gold nibs: firstly, with gold being softer than steel it’s easier; and secondly, it’s probably not worth putting in the effort on a steel nib. Working the underside preserves the look of the top of the nib; however, while I’m far from being an expert, I believe messing with the underside of the nib is directly affecting the ink flow, so it’s not just a question of grinding it down.

So, what about just attacking the top side instead? Seems straightforward! Just get out a rotary tool or even just some wet-and-dry sandpaper and get to it! With Jinhao nibs being as cheap as they are, there’s nothing to be lost.

I sanded off the top layer to the point that the engraving no longer showed. Sanding flat, I took off the upper-side of the tip as well; unfortunately, I chipped it on the right tine, but it doesn’t seem to have affected the writing significantly, as the business side of the tip is intact. I also slimmed down the shoulders a little, and smoothed them off.

Writing, it now performs much like an unmodified Ahab. It doesn’t feel the same in terms of spring, and I’m not entirely sure whether I prefer it or not. I left the finish rough, and it actually looks pretty sweet. The underside of the nib is still gold-plated, which should help the wetting of the ink.

This time I tried to concentrate more on slimming the tines in top-down shape rather than thickness. I did still sand down the top layer, and indeed polished it to a shine. This made for a very soft nib, but not as much “flex” (ie. deflection, ie. line variation) It also feels weird, as there’s little resistance before it starts to flex. I haven’t quantified the stress/strain but it does feel a lot more linear than Attempt #1 or another semi-flex steel nib. I don’t really like it.

I did this one in more of a rush, limiting myself solely to sanding down the thickness rather than reshaping the top-down aspect. I did thin it unequally, with the tines getting less attention, while concentrating instead on the shoulders… I got this down to just 0.15mm at the shoulders which should maximise hinging. The problem is that the tines go out of whack really easily, requiring adjustment. In short, it’s more fragile.

I expect this may be in part due to work hardening: with the more extreme removal of material, the remaining material will be harder and will deform in the plastic domain than elastic. Neither my equipment or experience is up to tackling annealing or other management of hardness, so I’m not really going to address that.

Unfortunately, the finish and overall uniformity of Attempt #3 is sub-par compared to Attempts #1 and #2. I didn’t want to spend too much time fixing this, as I think it was mainly the result of tine misalignment near the start and subsequent attempts to correct. Instead, I’d just start again with an Attempt #4.

I didn’t get around to cutting scallops, oddly considering it’s the first thing I do with an Ahab nib. With an Ahab I still have to consider scarcity, so my desire here with an abundant supply of Jinhao nibs is to go for the more advanced thinning options. As the tine narrowing of Attempt #2 was less successful, I didn’t continue down that course for Attempt #3. I might try doing it later. Another approach would be to widen the breather hole, having the effect of reducing curvature at the shoulders while still maintaining the moment that gives deflection (which can be lost if the shoulders are trimmed instead)

My conclusion is that with simple tools (sandpaper, a cheap rotary tool a.k.a. “Dremel”) it’s best to make a few conservative changes here and there rather than concentrating on any one method. Out of the three experiments, #1 performed the best, as I didn’t go to either extreme of reshaping (#2) or thinning (#3). I think it is possible to improve the softness and acquire some mild semi-flex from a Jinhao nib, but I wouldn’t expect much more than that!

If/when I get around to it, my next attempt will probably be a re-do of Attempt #1 with some mild influences from #2 and #3, and possibly some geometry change with scallops or shoulder adjustments.

Well, a day or so later, the failure of Attempt #3 was getting to me, so I had another go. Attempt #4 started as a redo of Attempt #1: just thinning and flattening the surface. I wasn’t as successful with a completely flat surface as #1, but the tip and overall integrity was kept intact. This resulted in a good writing experience with hard semi-flex.

I then decided to go a little further and thin up the shoulders and eventually cut some mild scallops. This is to reduce the minimum distance between the breather hole and the edge, encouraging a hinge effect along a line that encourages deflection.

It seems to work! It writes smoothly, well, and is a good semi-flex. Softer and easier than an Ahab, but not as far as an FPR Ultra-Flex; I think this is a happy medium and the fact that I can get it out of a £0.20 nib is very encouraging.

Anyway, buying a bunch of Jinhao 159s on eBay and a cheap rotary tool – mine cost just £10 on Amazon on a Lightning Deal! – is a great way to play with nibs and understand how the material changes affect the writing performance. As ever, I’d strongly recommend reading Fountain Pen Design’s page on flex modification. You don’t have to be a nibmeister to try these things out; just don’t do it on a pen or nib that’s worth proper money!

And, for crying out loud, don’t blame me if you wreck an expensive nib and/or pen, rotary tool, favourite clothing, carpet, body parts, etc. Attempt any of these at your own risk to life, limb, property and pride. Okay? Okay. :) 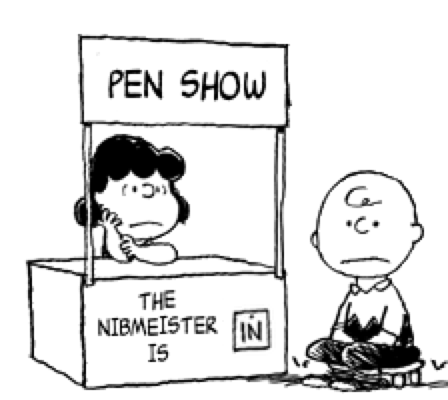 (I Am Not A Nibmeister!)