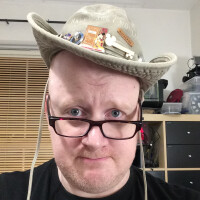 This is my homepage, blog, site, or whatever you want to call it.

I’m a geek living in Cambridge, England, working for Starberry as their Head Geek: a varied role, from strategic to technical, getting my hands dirty with development, architecture, documentation, training, operations, and just about a bit of everything really; working with a large team of talented developers and telling them they’re doing it wrong, ie. not the way I’d do it.

In my spare time, I geek out on various tech projects when I have the time, on a wide range of bits and pieces. I also watch a lot of movies.

Please don’t bother contacting me if you want to recruit me or add me to a database of people you want to get other people to recruit: I’m happy where I’m working.

What’s with the whole pen thing?

While I was given my first fountain pen as a kid, and I’ve owned a Parker Frontier for more than a decade, I never really used them. At the start of 2018, I realised my handwriting had degraded to a point of illegibility from lack-of-use, and my six-year-old daughter was quickly catching up with me. So, I decided to do something about it, and at about the same time I discovered Brian Goulet’s YouTube channel.

In April 2018, I bought my first fountain pens since about 2002 – a Lamy Safari All-Black and a “Dryden” rebranded rosewood pen from Amazon. While these were uninspiring and have gone unused since, I went on to buy a few others, including a Noodler’s Ahab that really got me going. While it’s by no means perfect, it opened up the possibility of flex to me, and I knew that was the key for me.

Since then, I’ve acquired a few flex vintages, some nice mid-range modern pens such as a Pilot 912 FA and a Pilot 743 FA, a range of relatively cheap pens like Noodler’s Ahab, Konrad; Platinum 3776 Bourgogne and Chartres Blue (which I love) and a huge number of cheap kitsch pens from China (AliExpress), mostly Jinhao. I adore the silly kitschness of it, and compared to other niches (Montblanc, or even Lamy and TWSBI!) it’s a cheap thing to collect.

I’ve also taken to modifying nibs, specifically to smooth or slightly regrind, and make them more flexible with the common Ease My Flex modification, but more recently, just buying the excellent FPR Ultra-Flex nib and ebonite feed instead.

Anyway, I’ve kept track of a rough list of my collection here, with links to any reviews or notes I write. Also, a page of miscellany including pangrams, silly haiku, etc. to have something interesting to practice writing, and a list of NASA Launch Clichés for no apparent reason.

In recent months, I’ve had a lot else on my mind, and the pen hobby has taken a back seat. I’m no longer acquiring pens or inks, but I’m glad I took up the hobby and improved my handwriting in the process.

So yeah. I’m a ruddy social butterfly, me. One of these days I might actually pad one of those out a bit. Don’t hold your breath, though.

Saying that, I’m very personable and friendly, and if you say Hi, I’ll be happy to take time to talk… as long as you’re not a recruiter or a spammer, of course. I’m just apathetic about writing websites for “fun”.